Pakistan: Kasur child rapes: We are all responsible! 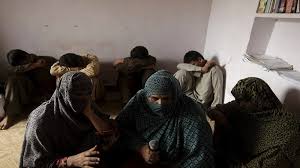 Kasur—Bulley Shah’s once-famous town, is now the country’s notorious melting pot of frequent incidents of child sexual abuse-cum-murders due to the criminal negligence of the Punjab government, police and local community, in-depth interviews of professionals conducted by Pakistan Today revealed.

The area is in the spotlight for the third time following the rapes and murders of three minor boys whose bodies were discovered on Sept 17. One of the bodies was identified as eight-year-old Faizan while the remains of the other two are believed to be of Ali Hussnain and Suleman Akram.

Police sources said that four children aged between eight and 12 years had been missing since June.

According to the details, Faizan had gone missing on Monday, six-year-old Muhammad Imran went missing on June 3, whereas nine-year-old Ali Hussnain and eight-year-old Suleman Akram went missing on August 8 and August 17, respectively.

Sahil, a local NGO working for child rights, says that over 1,304 children have been sexually assaulted in the entire country within the first six months of the current year with Punjab province taking the top spot with 652 children sexually abused in various districts.

It may be mentioned here that Arif Nawaz Khan, the incumbent Punjab inspector general of police (IGP), was Addl IG Operations when the largest child abuse scandal involving 280 victims took place in Kasur district in 2015.

Talking to Pakistan Today, Punjab Additional IGP Operations Inam Ghani said that a collective effort was needed to ensure the prevention of abduction, sexual abuse and murder of children as it is not the sole responsibility of the police department.

When asked why Kasur’s pedophilia problem had grown over time instead of being curbed, Ghani replied that sexual exploitation of children at this rate was a worldwide phenomenon whereas Kasur had simply become a household name because the reported incidents are seen as a continuity of the 2015 incidents and particularly the Zainab rape case.

The senior police officer was of the opinion that the problem exists in every district of the province at the same scale and that Kasur was simply under the spotlight because of public and social media hype.

However, the police officer failed to answer why the district reported the highest number of rape and murder incidents as compared to the rest of the country.

“I don’t have any data regarding this exactly but the problem is everywhere. The Kasur incidents are nothing more than hype,” said Ghani, who has also been appointed as the focal person of the police department.

‘POLICE HAS NO DNA RECORD’:

To a question on whether the police had any DNA record of previously held suspects in connection with the Zainab rape case and if they would match the recently collected evidence with previous data, Ghani revealed that the law enforcement department was devoid of such a facility.

“Of course, the samples would be matched but the police does not have its own DNA bank. Although one should be established, and in fact, NADRA can do it by managing the data of citizens and mentioning it on ID cards,” he said, adding that the other way DNA could be matched with a criminal record is with data available online.

When asked about the role of police and how child sexual abuse could be prevented and restrained in Kasur as well as other areas, Ghani stated that the solution lay within combined effort by the government as well as civil society. “Parents, civil society workers, teachers; everybody needs to take some responsibility,” he added.

Dr Tahira Rubab, a consultant psychiatrist, said the recent incidents of child abuse in Kasur district are evidence that everyone, including the government, civil society and parents do not take this issue seriously.

“They heard Zainab’s killer was hanged in jail and were pacified. It should have been done publically. It would have sent the psychopaths and pedophiles a message and remained in everyone’s mind,” Dr Tahira said.

She alleged that Kasur had turned into a go-to pornography hub after videos of children being sexually exploited were recovered from the area time and again.

“I fear that there are people who are doing it with a business point of view now. The place is a full-fledged pornography centre,” she added while recalling the couple that was arrested over charges of sexually abusing 137 children in Rawalpindi a few months ago.

“They sexually abused girls and recorded the humiliating videos. The question is why? The answer is: for the international black market,” Dr Tahira further added.

However, the psychiatrist too could not point towards the reason why and how Kasur has become hell for children and heaven for rapists and murderers.

“Most psychopaths and pedophiles are people who were sexually abused or involved in such heinous acts in their own childhood,” she said, suggesting that the origins of the problem may go back a long time ago.

Iftikhar Mubarak, a civil society member, said that he personally attended meetings held by the government and also took part in a number of sessions but it was like putting energy into a black hole.

“The government did not implement any of the policies and plans it had made after the injustice that Zainab Ansari suffered,” he said.

“Child policy is lacking not only in Punjab but also in other provinces but it is also true that prevention of child sexual abuse is the whole society’s responsibility. It is a fact that the police failed; however, everybody, especially parents and teachers should work on it together,” the concerned citizen said.

“This subject must be added to school curriculum to make children aware of sexual abuse and molestation,” he concluded.