Israel accused of indiscriminate phosphorus use in Gaza 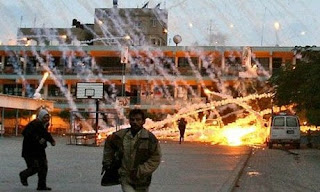 White phosphorus burns in contact with oxygen and causes deep burns when it touches human skin, sometimes reaching to the bone. The weapon is not illegal itself and can be used to provide a smokescreen on the battlefield or as an incendiary weapon against a military target. However, its use is regulated even by customary international law. It must be used in a way that distinguishes between combatants and civilians and cannot be used to target civilians.
Most of the Israeli military's white phosphorus in Gaza was fired in 155mm artillery shells, each containing 116 wedges soaked with the chemical.
In January, the Guardian found one such shell still smoking several days after it was fired, outside the home of the Abu Halima family in Atatra. One white phosphorous shell hit the house directly, killing a father and four of his children. His wife was severely burnt. Human Rights Watch also reported the same case.
Human Rights Watch found 24 spent white phosphorus shells in Gaza, all from the same batch made in a US ammunition factory in 1989 by Thiokol Aerospace. Other shells were photographed during the war with markings showing they were made in the Pine Bluff Arsenal, also in America, in 1991.
Human Rights Watch said the Israeli military often used the weapon even in areas where there were no Israeli troops on the ground, which it said, "strongly suggests that the IDF [Israel Defence Forces] was not using the munition for its obscurant qualities but rather for its incendiary effect".
Advertisement
The group said it found no evidence that Hamas fighters used Palestinian civilians as human shields - a key Israeli claim - in the area at the time of the attacks it researched.
Link