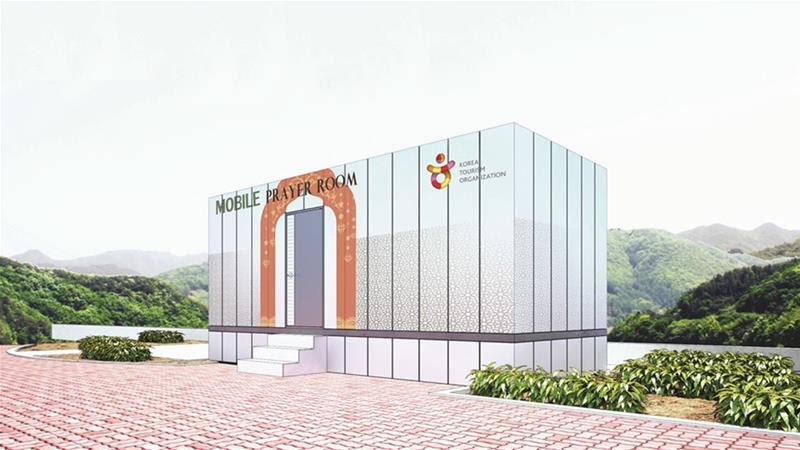 South Korea is in news again for the wrong reasons. The Korea Tourism Organization (KTO) has cancelled plans for a mobile prayer room in Gangneung for tourists at the 2018 Winter Olympics after strong opposition by anti-Muslim campaigners, the city tourism department's chief told Al Jazeera.


South Korea has witnessed an increase in the number of Muslim tourists over the last few years. According to the KTO, a 33 percent increase was registered in 2016 compared with the year before, and the numbers reached 1.2 million by the end of 2017.

Tapping into this economic potential, the country has increased the number of Halal certificates for its restaurants and prayer rooms, and the Seoul Tourism Organization is promoting a series of videos showcasing Muslim-friendly restaurants around the capital.

A KTO press release last year confirmed one of its aims was that "the provision of travel convenience should be strengthened in order to increase their satisfaction and to encourage repeat visits".

The Korean Muslim Federation (KMF) expressed its disappointment with the decision, adding that the "Olympic Games should go beyond a single nation, race, culture and religion to achieve harmonisation".

"This decision demonstrates that we, as a host country, lack thoughtful understanding," Lee Ju-hwa, a KMF representative, told Al Jazeera in a statement.

"Instead of claiming that the installation of a prayer room is preferential treatment given to a certain religion, we need to raise awareness that it was to consider others with different faith and beliefs," he added.


Last year Forbes covered this topic of attracting Muslims as tourists in depth.


One initiative to attract more Muslims is Halal Restaurant Week Korea, which will actually last two months. From Sept. 1 to Oct. 31, 107 halal restaurants are offering discounts for diners. The KTO also published a free e-book of halal restaurants around the country.

Korea already has a strong focus on Muslim visitors from Southeast Asia, like Indonesia and Malaysia, and in the Middle East. It's growing its tourism push in Central Asia, too; the KTO opened a tourism office in Almaty, Kazakhstan in July.

The focus may seem unexpected for a country that has eight mosques, but it’s quite obvious for industry insiders. According to a 2014 Thomson Reuters report, Muslims spent $142 billion on travel (not including religious pilgrimages). It was just slightly less than Chinese travelers that same year ($160 billion) and U.S. travelers ($143 billion).

Korea is on a mission to recuperate some of this year's devastating tourism losses. Chinese tourists previously comprised almost half of all visitors to Korea. In March, reacting from Korea’s deployment of the the Terminal High Altitude Area Defense (THAAD), China began "boycotting all things Korean." One such retaliation was the ban of all group tourism packages to Korea.

As a result, only half as many Chinese have visited Korea this year compared to the same period in 2016. Overall tourism has fallen by 23%, or almost three million people, and tourism receipts have also shrank by 24%.

In part thanks to its new Muslim focus, Korea has boosted tourism from some niche countries. Twenty-two percent and 25%, respectively, more visitors from Kazakhstan and Iran have visited Korea this year. Uzbek and Middle Eastern tourism has increased by 8% each, and Pakistan by 4.5%.

More on Islam and Muslims in South Korea at Islam Awareness Homepage here.
Posted by Zafar Khan at 14:43