'Tis That Time Of The Year Again

Its mid-December and for Muslims living in the western society, it's generally difficult times. Its the Christmas parties that can't be avoided that contains drinks and oppotunities to fall in Satan's traps.

Whenever I need to go to any of these unavoidable parties, my intention is to educate atleast 3 people on how Christmas has got nothing to do with Christianity and how bad Alcohol is for health. Follow these links if you want to get up to speed on Christmas and Alcohol.

There is a good article in Al-Jazeera about how Victorian Muslims celebrated Christmas. For those of you who may not know, Victorian era was the period of Queen Victoria's reign, from 20 June 1837 until her death on 22 January 1901. 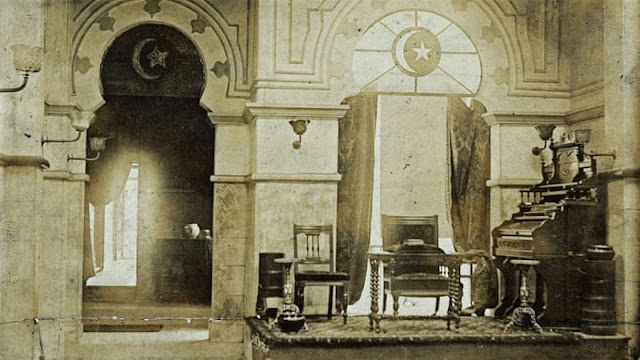 At 6am on December 25, 1888, the winter sun was yet to rise over the English city of Liverpool.

A Victorian terrace house was feverish with activity.

The soft glow of candlelight emanating from 8 Brougham Terrace revealed men and women busily putting up decorations and preparing food for the big celebration ahead, Christmas Day.

In one corner, a familiar Victorian scene of a woman playing the piano and directing hymn rehearsals, the singers' voices muted by the howling of a bitter northeasterly wind as it rattled the thin panes of glass.

This was Britain's first mosque and Muslim community preparing for their very first Christmas Day.

At 8am, having led the tiny congregation in the early morning prayer, the Imam finally opened the mosque doors.

He was greeted by more than 100 of the city's poor, who had been invited to enjoy a charitable Christmas breakfast inside what locals called "Islam Church".

As the group of recent converts served the paupers a hearty meal of "sandwiches, bread and meat, seedloaf, bunloaf, bread and butter, tea and coffee," the music began.

Hymns praising the birth of the Prophet Isa, or Jesus, rung out through the venue. By evening, numbers swelled. Word had got around, and the Muslims offered a "substantial tea" and small musical concert to the visitors.

The entertainment began with "mesmeric performances" by two young Muslims before "some delightful airs upon the zither, the fairy bells and the mandolin" by one Miss Warren.

The finale was a "magic lantern" show and photo series from the imam's recent tour across distant Muslim lands.

These descriptions of Victorian Muslims at Christmas were taken from the pages of The Crescent, the country's first Muslim newspaper.

It was published by the Liverpool Moslem Institute between 1893 and 1907 and was recently made available online by the Abdullah Quilliam Society - which is based at the historic mosque - in partnership with the British Library.

"This reminds us there was an earlier generation of Muslims, looking to spread the word of Islam through finding points in common rather than things to argue about," said Timothy Winter, a prominent British Muslim scholar.

Winter, the dean of Cambridge Muslim College and lecturer in Islamic Studies at the Faculty of Divinity, University of Cambridge, converted to Islam in 1979. He has worked extensively with the archives.

The Christmas scenes, described in every January issue of The Crescent, may come as a surprise.

Winter said the festivities demonstrated a willingness to appropriate local traditions, something that was easier because the group had grown up with them.

"They possessed a spirit of openness and hospitality and were more concerned with God and truth and conveying the word [as opposed to] boundary issues and questions of identity and difference," Winter told Al Jazeera.

Quilliam's role and influence were such that he was given the title of Sheikh Ul Islam of Britain by the Ottomans, and when he left Liverpool in 1908, it seems his community disbanded too.

Today, there are more than 2.5 million Muslims in Britain and, unlike Quilliam's community, they hail from a multitude of ethnic and cultural backgrounds and observe Islam differently.

"Today, we have Muslims in Britain whose families have come from all over the world as well as those who are ethnically English, and this inevitably means they approach Christmas in a number of ways," she told Al Jazeera.


While it is common for some "very religious" Muslims to say how Un-Islamic wishing your neighbour, friends or family who may not be Muslims are, I would point out to Fatawa on Islam Awareness Homepage that say otherwise.

Muslims, however, are most respectful of what others believe and wish to live on friendly terms with all their neighbors, whether they are Muslim or not. In this context, returning the Christmas greetings of non-Muslim friends does not present us with a problem.

Obviously, if we sent a card, it would not be a religious card with Christian symbols, but rather some other symbol of the festive season. If the people we are responding to are devout believers in the Christmas message, we might send a greeting that says something like, "May God bless you all as you celebrate your feast," out of respect for their religious belief.

If they are, like the vast majority, simply celebrating what has become an important social occasion, we can respond to a well-intentioned greeting with a card that says something like "Compliments of the season" or "Greetings," since neither they nor we are celebrating the religious festival.

In such a context, even a card with a picture of a tree or some mistletoe or a robin red-breast, and the greeting "Merry Christmas" is not really a problem for either of us.

Going for drinks in the pub to celebrate is clearly out of the question. Going to parties where alcohol is being consumed is not how Muslims behave. However, if our non-Muslim neighbors invite us into their house for a piece of Christmas cake or a mince pie, we can accept their invitation.

Christmas should not be allowed to become a time where Muslims are being singled out as being unfriendly or not a part of the community. Indeed, we should be seen by our neighbors as full of fun and quite comfortable living with them. Let us not forget, though, to invite those same people to join us in our own homes at the time of the `Eid or to join us for iftar during Ramadan.

Showing our non-Muslim friends that Islam is a religion of peace and that we are peaceful and kind people is, indeed, at the heart of how we should behave. Peaceful and kind does not, of course, mean weak. We are not offering Christmas greetings out of weakness because we are in a minority. No, our greetings to our neighbors come from a strong and proud faith that we are called to be Muslim.

Our actions throughout the year, not just at Christmas time, should show how good Muslims behave and how we are faithful to prayer and dedicate all things to the Mercy of Almighty Allah. Indeed, Christmas time is actually a time for da`wah.

In a world which has lost all sense of God and which turns to alcohol and consumerism to drown its sorrows, we can show that there is a better way and that the way for all mankind to experience peace is not by kissing under the mistletoe or visiting Santa Claus in his Grotto, but by embracing Islam. In sha' Allah, even Christmas is a time for us to tell others about Islam.