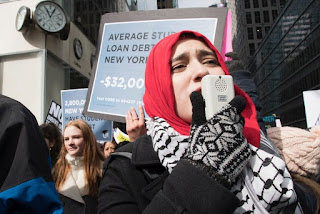 Hebh’s parents are naturalized U.S. citizens who emigrated from Jordan to Canada and then to the United States. Hebh was born in Canada but moved to the Bronx before she turned one. She’s reluctant to answer questions about her family. “They’re not involved in activism,” she says. “I had to be politicized from a very young age. When Bin Laden was assassinated, teachers were asking me, ‘What do you think about that?’ And because I’m Palestinian, they were asking me, ‘What do you think about the war in Gaza?’" During the Gaza War, which ran from 2008 to 2009, Hebh was just nine years old.

Islamophobia is woven into the fabric of her everyday life. She lists the precautions she takes on the subway against an Islamophobic attack as frankly as if she were describing how to cross the street. Don’t stand too close to the platform in case someone pushes you onto the track. Make sure your feet are planted firmly on the ground. If you’re carrying a large bag, make a point of opening it so the people around you don’t get suspicious. “It’s internalized and normalized in me,” she says.

With her expanded focus after Trump's election, Hebh and other activists planned the Foley Square protest entirely via social media and phone calls. Seeing it gain momentum on Facebook, “I reached out and said, ‘Let me do the permits for you,’” Hebh says. A totally self-taught protest planner, she also helped organize the list of speakers and the sound system.

The student walkout originated from a conversation at Beacon High School.
“I made a Facebook page, I invited everyone I know, and I got the permits again,” she says. The walkout’s focus was broad. “It was about Black Lives Matter; it was about the Dakota Access Pipeline; it was about the Muslim ban; it was about refugees. It was about a lot of things that came together well.”
Next, she cofounded the student coalition United Students of NYC to help young activists coordinate. “We didn’t just come to a protest to yell our lungs out; we came because we want to be a part of the story,” Hebh says.

New York City public advocate Letitia James spoke at the student walkout Hebh organized. “I love the energy of young people,” she said. “Hebh’s representative of a wider group of young people who are energized and angered by the state of our nation, and who want to be part of the resistance.”
“Each and every day I try to motivate young people to get involved with politics, whether that’s to run for office or to get involved at a local level,” James adds. She recommends that aspiring activists look into their local community boards, school boards, precinct councils, or block associations. “You can contact your local officials or Congress members. And you can get online — there are conversations going on on Facebook, on Snapchat. We’re all interconnected now — there’s no excuse not to get involved. This, too, is your country,” she says. “If you believe in freedom, if you believe in democracy, if you believe in the freedom of the press, if you believe that all immigrants are welcome here, you should get involved.”