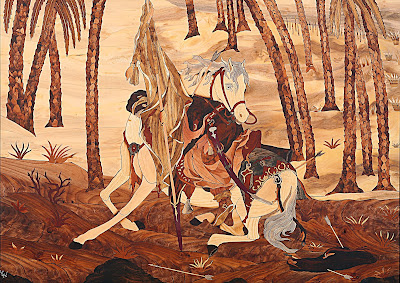 The Battle of al-Harrah took place after the massacre of the family of the Prophet (s.a.w.) at Karbala.  The army of Yazid ibn Mu’awiyah attacked Madina whose residents had revolted against his tyranny and outrage over the murder of the Ahl al-Bayt.  In Madina, they massacred 10,000 of the best Muslims then, including 700swahabah who fought valiantly until the end.  Among the dead were the swahabah who had participated in the Battle of Badr.  More than a 1,000 of their daughters were raped and impregnated.  For three entire days, there was no adzan and swalah in Masjid an-Nabawi.  The pillars of the mosques were used by Yazid’s Army to tether their horses and the animals defecated therein, soiling the place.

The pillage was done at Yazid’s explicit order as recorded in the history books.  The people of Madina, theswahabah and the tabi’un, were forced to give bay'ah to Yazid as slaves to him.  When a man from the Answarsaid, “I give bay’ah to him on the Qur’an and the sunnah”, they chopped off his head.

Imam al-Bukhari (r.a.) narrated in his Swahih, that the Prophet (s.a.w.) said, “My Madina is a Sacred Sanctuary, so whosoever commits crime therein, then upon him is the Curse of Allah, His angels and all people.”  On the strength of this hadits, we curse Yazid ibn Mu’awiyah, those who follow him and we rebuke those who think he is in the right to this day.  And the only group that disregards this hadits and honour Yazid is the Wahhabi sect.  Only a kafir would support a kafir.