Muslims Aren’t A Race, So I Can’t Be Racist, Right? Wrong. 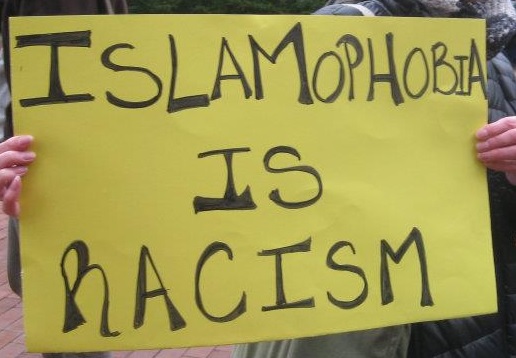 According to Hall, there is a new type of racism — “cultural racism,” which is my focus here. Racism is no longer about race (skin color) but culture. People are Othered and discriminated against not (simply) because of the color of their skin (or other phenotypes) but because of their beliefs and practices associated with some “imagined culture.”
Cultural racism, therefore, happens when certain people perceive their beliefs and customs as being culturally superior to the beliefs and customs of other groups of people. Cultural racism, in-turn, reproduces the idea of “the hierarchy of cultures,” meaning, in the context of current affairs, that “our” Western culture is superior to “their” Islamic culture. This way of thinking is problematic because it essentializes diverse classifications like “Westerners” and “Muslims.” It creates a binary of “Western = civilized” and “Islamic = uncivilized.”
Bobby Sayyid, another favorite thinker of mine, argues that Islamophobia is undoubtedly a form of racism. He regards it as a type of racism that “takes up the white man’s burden for the new American century. It is a humanitarian intervention, not a mission civilisatrice; [Islamophobia] only wants to spread democracy not to expropriate resources; it does not want to exterminate ignoble savages, only to domesticate unruly Muslims.” In this context, the U.S. invasion of Iraq and Afghanistan can be treated as wars driven by cultural racism. Bush wanted to spread “democracy” and “liberate” Muslims, particularly women, among other things. Muslims, he theorized, were incapable of developing these “culturally superior” ways of life on their own, so they must be molded and trained to be more like “us,” the civilized people. If racism represents systemic oppression based upon preconceived notions (or stereotypes) of particular social groups, then the U.S. government is most definitely guilty of racism. To be specific, cultural racism.
Sayyid makes another point that is worth mentioning. He states that Muslims are depicted in public discourse as “arch-villains,” an idea which produces all sorts of “racist anxieties” in the minds of non-Muslims. Yet, despite the obvious connections between racism and anti-Muslim sentiment, Islamophobia has been presented as nothing as sordid as racism, “but rather a rational response to real threats to western, nay universal, values,” as he puts it.
Let me be clear here. There is nothing rational about Islamophobia. Treating Muslims poorly because they are Muslim is racism. It is that simple. If someone gives a Muslim women wearing the hijab a dirty look, sorry, but you are racist. If someone assaults a Muslim woman wearing the hijab — which has recently happened in Toronto — yeah, you are a racist. Time to face the music.
Need more proof that Islamophobia is a form of cultural racism? Consider the experience of Inderjit Singh Mukker. Mukker was assaulted in September 2015 for “looking Muslim”; he was dragged out of his car and beaten to a pulp by a man screaming “you’re a terrorist, bin Laden!” The twist here is that Mukker is not even Muslim; he is Sikh. The perpetrator of this crime looked at Mukker’s turban and thought “he’s a Muslim. He’s dangerous.” A cultural symbol, in this case, was used as a signifier to judge an entire group of people, however wrongly. Is this racism? Most definitely. Even Sikhs suffer from Islamophobia.
Full article