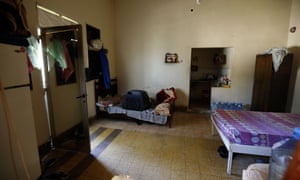 No words, just horror.
Police and judicial officials say the women were trafficked from war-torn Syria and Iraq, recruited by agents of the network for supposedly legitimate jobs such as restaurant workers, before being imprisoned at Chez Maurice.
“They were perhaps looking for weaker families, where nobody is going to ask about the woman, such as if her father died in the war,” said Mousallam. “They are hunters. They did not for a moment treat them as humans.”
Those who resisted working as prostitutes were raped and beaten, and then forced to have unprotected sex with customers. They were sometimes electrocuted or whipped, in an environment that judges described as “a journey to hell”.
The indictment said the women were forced to have sex with customers more than 10 times a day, making between $30-70 per session, all of which was taken away by the guards, including any tips, in effect making them sex slaves.
Jabbour said she hoped the Chez Maurice case would act as a model for similar situations in the future, with women treated as victims rather than being on par with those who run any network.
But she said there would also have to be a cultural shift in the way Lebanese society looks at prostitution. Kafa is not in favour of legalising prostitution, saying it legitimises exploitation and the treatment of women as commodities. Instead, it advocates punishing human traffickers and sex buyers.
Though Lebanon is one of the more liberal Middle Eastern societies, domestic violence and gender inequality are still pervasive. A one-of-a-kind survey carried out by Kafa, which interviewed sex buyers in Lebanon, found that many thought that if prostitution was completely prohibited, rates of rape would increase, and so it was necessary to have a sub-class of women who would shield the rest of society from male sexuality. Most of the interviewees felt entitled to have sex whenever they pleased, and also believed that the prostitutes enjoyed having sex with them, on top of being reimbursed.
“Everything evolves around the sexuality of men,” she said. “We raise boys and men with the idea that it’s very normal to buy sex and to have sex whenever they want, not to control their sexuality.”
Full article