Syrian mother's agony: why I made my teenage daughter become a child bride 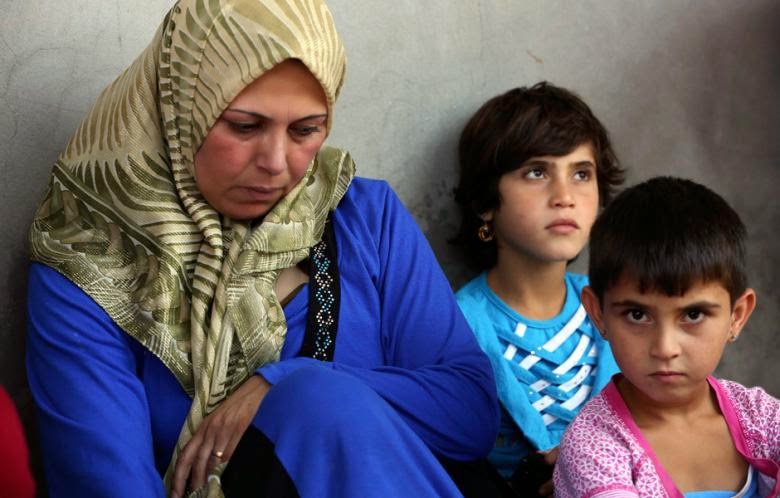 We left in February last year: me, my husband Ahmed and our seven children – two sons and five daughters. I borrowed 5,000 Syrian pounds (£20) from my mother to hire a car to drive us from our home in Deraa to the border with Jordan.
When we got to the borderlands, we had to walk with other Syrian families who were fleeing Syria too. We were walking at night to avoid being spotted by Syrian security, who would shoot at us. It was so risky, but I was more scared of what would come next, what sort of life we would have in the refugee camp.

Finally we got into Za'ateri camp, which was like paradise compared with the hell of Deraa. And yet I became worried about the safety of my five daughters. My husband is old and not well, and my sons are little boys. There is no one to protect us. The tents are too close to each other, young men would pass by and stare at our tent.
My eldest daughter, Rulla, was 13 and is attractive. She and her other sisters could not even change their clothes in the tent. We were so scared that my daughters and I might be attacked by strangers. The camp was full of men of different ages. I could not let my daughters go alone to the bathroom, I had to take them one by one even though the bathrooms were far away. Along the way we would be harassed by young men. If any of my daughters wanted a wash, we would have a basin in the tent, and I or my mother would keep watch in case anyone came.
Looking around I could see that families were trying to get their daughters married by any means, even if they were only 12 or 13. They were not asking for dowries, they just wanted a man for their daughters.

My daughters were a huge burden to me. I never thought I would think of them like that. I was so glad when they born. You can't imagine the fear of a mother when she looks at her daughter and she thinks that she might be raped at any moment. It is horrible to think if the rape story became known publicly, her uncles would kill her immediately. I felt like dying when I thought of that moment.
Most of the marriages in the camp are for girls of 12, 13 or 14, but even 10-year-olds might get engaged if they are tall and developed. The way it works is that a female relative of the groom tours the tents to find a girl. When she finds someone suitable, she brings her to the man, who asks for her hand. The groom might be Syrian or Jordanian or from other Arab nationalities.
A 70-year-old Saudi man married the daughter of my neighbour. She was already engaged to a Syrian man but her family could not believe their luck in getting a rich Saudi, so they dumped the first groom to make way for the second. The Saudi man had to pay the family 1m Syrian pounds to marry their young daughter.
It was a big shock when an old Jordanian man came to my mother's tent asking for her hand. He said that he wanted to provide her with a better life and spare her humiliation. These Jordanians are really exploiting Syrian refugees' terrible circumstances.

An acquaintance in a nearby tent had an 18-year-old nephew, Omer, who worked in an embroidering workshop. She told him about our daughter, came to our tent and told us that she wanted Rulla for her nephew. Rulla blushed in astonishment. For me, it was hard to accept the idea. She was still a child, playing with kids in the camp. But the war, hunger, humiliation and fear forced me in the end to accept the offer. It was difficult to throw my daughter into a new life I do not know and she herself does not know either. Rulla knew nothing about marriage, I had to teach her every single thing.
We rented two houses in Amman, one for Omer and one for us. The groom brought jewellery and even paid for a wedding ceremony. We had to take in the wedding dress to make it fit Rulla's tiny body. I had to tell her how to behave with her husband. I asked her if she loved her groom. She said she did, but I was not sure that she knew the real meaning of love.
I fumbled to illustrate things to her bluntly. I told her that her husband might get too close to her, he would kiss her and she should not shudder but welcome that. I did not want to scare her with the whole story of marriage. I told her that her husband would teach her how to be a good wife. I sat for two hours with the groom himself before he married my daughter. I tried to prepare him for the fact that he was getting married to a child, not a mature woman, and that he needed to be more tolerant with her.

The second day after the wedding, I ran to see Rulla and asked her how her night had been. She told me it was OK and that everything went well. I'm praying all the time that her marriage will last. The problem is Rulla can't forget that she is still a child though she is married now. In one of my visits, it was terribly shocking to see her wearing socks and slipping about on the floor like other children in the house. I told her she should not do that because she is a married woman now. She said:"Oh mum, I really like to run like before and play with other girls."
Rulla now lives with her husband's family because she needs her mother-in-law to guide her. She has been married for five months now. I do not think her husband will allow her to complete her studies. He wants her to focus on her house and kids.
Ten days ago, I took Rulla to the hospital, thinking she was pregnant but the doctor found that she had an ovarian cyst. That was bad and good news for me at the same time. Deep in my heart I was content that she won't get pregnant soon because she herself is still a child and her marriage is not documented, which means the baby would not have a birth certificate. I still ask myself every day if I was fair to Rulla.