Rihanna in another outrage: And this time she's fully clothed.... at UAE's Sheikh Zayed Grand Mosque 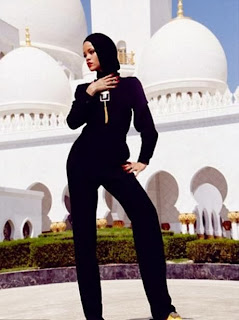 She’s used to causing controversy with her racy music videos, but even dressed head-to-toe in a hooded black jumpsuit Rihanna has managed to provoke outrage.

The 25-year-old "Diamonds" singer posted images on her Instagram account showing her posing at the Sheikh Zayed Grand Mosque in UAE, where she is currently on tour.
Despite a very conscious effort to tone down her usual attention-grabbing-garb, she is seen sporting crimson lipstick and wearing dark red fingernails while adopting a series of trademark sultry, pouting poses that some have deemed "disrespectful" for a place of worship. Her followers on Twitter couldn't decide whether to condemn the pictures or enjoy them.
“Rihanna may look gorgeous and all but she’s covering her head out of fashion not out of respect for the mosque,” wrote one user.
Another person responded to the images writing: “I don’t see how Rihanna posing adjacent to a mosque in Abu Dhabi is disrespectful.
"If anything she’s showing respect by supporting the hijab.”

I'm not outraged in the least I think she showed respect by wearing hijab  at a mosque and her poses were not sexual. She looks really classy and I think she has shown women look chic in hijab not ugly like so many anti-hijab people claim. I also think women shouldn't have to listen to anything men say about hijab. They can think and choose for themselves inshaAllah.
Posted by Zafar Khan at 08:30