For those who could not make it to Hajj 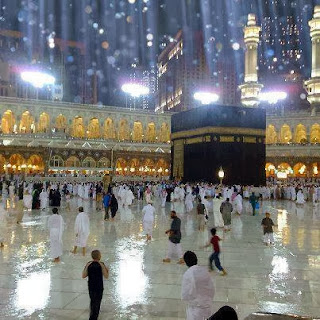 The Pilgrimage to Makkah, is one of the essential elements of the Islamic faith. It is obligatory on all believers provided they have the financial capability and physical ability to endure the challenges of the pilgrimage.

According to Islamic tradition the Kaaba, a simple square cube structure in Makkah, was the first house of worship established to remind humanity of the One Supreme God. The structure was reconstructed by Prophet Abraham and his son Prophet Ishmael.

The gathering of millions of faithful in Makkah during the days of annual pilgrimage, Hajj is a fulfillment of Prophet Abram's prayer.

The Pilgrimage to Mecca is a sign of supreme significance. It was Prophet Abraham's unconditional commitment to God that led him to leave his wife Hagar and his infant son Ishmael in this desolated desert. Prophet Abraham was reward for his unwavering submission to God, by a promise from Him to make this uninviting land into a place of promise and plenty.

Like any other article of faith, the pilgrimage can become meaningless if it is regarded as an end in itself rather than a means for the attainment of a meaningful life.

The following story reminds us of the spirit of Hajj.

The Cobbler's Hajj
It is related that a noted Muslim scholar Abdullah bin Mubarak, had a dream while he was sleeping near the Kaaba.

Abdullah bin Mubarak saw two angels' descend from the sky, and start talking to each other.

One of the angels asked the other: "Do you know how many people have come for Hajj this year?"

The other angel replied: "Six hundred thousand have come for Hajj."

Abdullah bin Mubarak had also gone for Hajj that year.

The first angel asked: "How many people's Hajj has been accepted?"

The second replied: "I wonder if anyone's Hajj has been accepted at all."

Abdullah bin Mubarak was grieved to hear that. He thought, "So many people have come from all over the world, crossing so many obstacles like rivers, jungles, mountains, suffered so many hardships, and meeting so many expenses. Would their effort be wasted? Allah does not let anyone's effort go to waste".

He had thought only so far when he heard the other angel speak: "There is a cobbler in Damascus. His name is Ali bin al-Mufiq. He could not come for Hajj, but Allah

has accepted his intention of Hajj. Not only will he get the reward for Hajj, but because of him, all the Hajjis will be rewarded.

did not will it, so I couldn't make my intention translate into action. Abdullah bin Mubarak was eager to find out how could this man's Hajj be accepted and blessed for all the people who went for Hajj that year when he didn't go for Hajj in the first place. While talking to the cobbler he could feel a certain purity in his heart. Islam regards greatness not in wealth or in power, but in civility, in good manners and the goodness of heart.Abdullah bin Mubarak further asked: "why could you not go on Hajj?". In order not to disclose the reason, Ali again replied "it was Allah's will".When Abdullah bin Mubarak persisted, Ali revealed: "Once I went to see my neighbor's house. His family was just sitting down for dinner. Although I was not hungry I thought my neighbor would invite me to sit down for dinner out of courtesy but I could see that my neighbor was grieved about something and wanted to avoid inviting me for dinner.

After some hesitation the neighbor told me: "I am sorry I cannot invite you for food. We were without food for three days and I could not bear to see the pain of hunger of my children. I went out looking for food today and found a dead donkey. In my desperation I cut out some meat from the dead animal, and brought it home so that my wife could cook this meat. It is halal (lawful or permitted) for us because of our extreme condition of hunger, but I cannot offer it to you." Ali continued: "On hearing this, my heart bled with tears. I got up and went home, collected the three thousand dinars I had saved for Hajj, and gave my neighbor the money. I too had to go hungry but that was to save money for Hajj, but I thought helping my neighbor during his difficult times was more important. Although I still desire to go for Hajj if Allah wills."Abdullah bin Mubarak was greatly inspired by the cobbler's story and told the cobbler of his dream.God is merciful and shows mercy to those who do likewise to his creatures. This act of compassion on the part of the cobbler was so pleasing to God that it not only earned him the reward of Hajj but was extended to all the people who came for Hajj.Hajj is a journey that can ignite the soul to be reminded of the time it was created and takes it beyond the dimensions of this life to the time it will meet the creator.The sincere performance of Hajj can transcend a person's day to day life into a spiritual awakening of the highest magnitude. A successful Hajj experience connects us to our creator and the greater compassion of humanity.