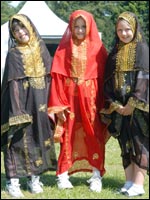 SANA'A -- Women living in areas of rural Yemen are increasingly losing their say regarding whom they marry as they become caught-up in the widespread phenomenon of ‘exchange marriages,’ in which money and family ties outweigh romance.

The expression rises from the phenomenon of spouses from two families being traded in what is essentially more of a business arrangement than a traditional marriage, Dr. Abdul-Baqi Shamsan, professor of sociology at Sana'a University, explained.
Shamsan told The Media Line that the main victim of this type of marriage is the woman. “In such exchange marriages, the women are dealt with as commodities by the family’s or group's elders, who strip them of their right to choose their life partners,” he said.
Poverty and tribal traditions push many people into marrying-off their children this way in order to avoid paying unaffordable high dowries or to strengthen ties between the families involved. But the prospect of these marriages ending in divorce is very high because usually if one couple breaks up, the other would most likely follow suit. Even if they don’t, the family-members from the second couple often intervene to end the second union as well.

So when Maha Saleh Al-Kawlani, 25, came home in tears and told her brother Mohammed that her husband Fuad had divorced and but kept their 18-month-old son with him, her family, which considered the divorce to be an act of ultimate disrespect to them, reacted with outrage.
Just a few days after his sister Maha’s divorce, Mohammed, seeking to get even with his brother-in-law for dishonoring his family, divorced his wife and Fuad's sister Jamila, keeping their two-year-old daughter with him. "From the time we got married, the family problems never stopped…Our marriages were dependent upon each other," Mohammed told The Media Line.
Their exchange marriage, which had been arranged by Mohammed's father Saleh Al-Kawlani and his father-in-law three years earlier, according to Shamsan never stood much of a chance because, he said, “exchange marriages are not based on acceptance, love and respect. Whenever one couple doesn't get along and breaks up, the other part of the business deal is that the other couple will likely break up as well.”

A similar story exposing the hazards of exchange marriages was told by translator Abdusalam Rajeh, 35, who married his cousin twelve years ago, and in turn, two of his cousins married two of his sisters. Rajeh said his father and uncle arranged their marriages, but nevertheless asked the would-be brides and grooms for their opinions.
“Unfortunately, most of the family problems that my wife and I experienced stemmed from external factors. For instance, if my sister and her husband quarreled, our marriage would be affected,” Rajeh recounted.
The father of six, Rajeh said his wife was taken forcibly from him by her father to her father's house more than once after Rajeh's sister went to Rajeh's family's home because of quarrels with her husband.
"Sometimes we had problems and the other couple was adversely affected," he said, adding, "Indeed, problems from the exchange marriage sent my marriage to the verge of collapse more than once.”
Things became so bad that he divorced his wife four years ago. "But my love for my kids and my wife; and my determination not to break up this family," led him to take her back, he explained to The Media Line.
According to Islamic law, a husband can be re-married to his ex-wife if he divorced her once or twice, but after the third divorce she must first be married to another man in order for her original husband to marry her again. This time, Rajeh said he took no chances, making an agreement with his uncle and brother-in-law that if one couple had problems, this must not have any effect at all on the other couple.
"However, I still feel that my marriage is not based on a firm foundation and is therefore prone to collapse at any time," Rajeh rued. “Though the interference of families in our marriages has significantly decreased since the agreement, it still sometimes comes into play."

Rajeh’s wife, 30-year old Shams Ahmed, told The Media Line that, "Exchange marriages simply mean unending problems [usually] resulting from other people's actions which we have nothing to do with.”
While there are no statistics on how many people are involved in exchange marriages, Abdulmalik Salah, a sociologist at the Yemen Center for Social Studies and Research Labor, told The Media Line that, "According to our knowledge of Yemeni society, we can say it's a widespread phenomenon in the rural areas, especially in poverty-stricken ones." Such areas constitute around 70 percent of the country.” According to Salah, some 60 per cent of couples marrying this way end up divorcing.
Salah said that the factors behind this widespread phenomenon include the harsh economic conditions, the high illiteracy rates among people in the rural areas, and their lack of religious understanding. Exchange marriage is actually prohibited in Islam, so Salah says that some people agree to pay low dowries to each other in order to get around this religious prohibition. For example, what might have been an expected dowry of $5,000 might instead end up no more than $100, according to Salah.

Shamsan agreed with Salah, adding that, "Some tribal people adopt this form of marriage in order to strengthen the bonds between their families; or uses it in an attempt to extend their influence." However, he said this often backfires as the relationship between the two groups or tribes involved in the exchange marriage turns sour when because of the divorce of one or both of the couples.
Indeed, Mohammed's father, Saleh Al-Kawlani, told The Media Line that, "The good relationship that I used to share with my cousin Ali turned into animosity after we married our children in an exchange marriage. Now, we don't even say ‘Hi’ when we cross the road.”
Mohammed himself hopes to put the whole experience behind him by marrying again, but stressed he would “never, ever marry or let any members of the family get married in an exchange marriage.”
His father agreed, saying, “I should never have arranged such marriages for my children. I had heard a lot about the ill-effects of exchange marriage, but I did not believe them before. I would never accept my children marrying in this way -- ever again.”
Source