The Misogyny of Salafist Doctrine 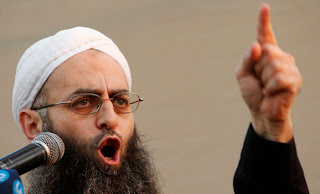 There is a rising misogynist Salafist discourse within the political changes going on in the Arab countries experiencing tumult. This discourse derives its exclusionary energy from the male-biased doctrine established by some Muslim imams.
The Salafist movement seeks to isolate women from public life and limit their role in the family. It considers women to be a source of discord and grants them no political rights beyond the right to vote, and only in a way that seems like a “pledge of allegiance.” Regarding women’s right to hold public office, the Salafists consider it unacceptable because they favor the concept of “stewardship” over the concept of the state. Contemporary Salafists hold basic premises that limit full citizenship for women.

The 14th century jurist Ibn Taymiyyah is a good example of how Salafists seek to marginalize women. He was very influential on the Salafists of his time. He held views about various women-related issues, such as alimony, menstruation, prayer and dowry. He was concerned about the growing influence of women, so he decreed that whoever obeys women destroys his country.
In his book "Al-Tawhid," Sheik Ibn Uthaymeen explicates the hadith reported by Sheik Mohammed bin Abdul Wahhab (1703–1791) as follows: “Some use the term sayyida [feminine of sayyid which means mister] when referring to a woman. For example, they say that some things are specific to men and other things to sayyidas. But this is a distortion of reality because only a man is deemed asayyid. The Prophet said, 'The women are your helpers,’ which means that they are captives, and he said that a man is the ‘shepherd of his family and responsible for his flock.’ So the singular form should be imra’a [woman] and the plural form should be nisa’ because only a man is a sayyid and women are men’s captives. So calling a woman sayyida is a distortion of reality.”

The Arab Spring Salafists went beyond the early Salafists’ teachings. They not only sought to isolate women socially and politically, but some Salafists — particularly the Egyptian Salafist Abu Islam — issued peculiar fatwas justifying the rape of the women in Tahrir Square under the pretext that it was punishment for them unveiling themselves. Salafist Sheikh Abu Ishak al-Hawini likened a woman’s face to her genitals, thus indicating that women are required to wear the niqab [full face veil]. The Salafists consider women to be sex objects that are a permanent threat to society.
But is this Salafist discourse a reflection of the growing female public presence? And why can’t the Salafists accept women’s changing role in society?

It goes without saying that the Salafist movement is not prevalent in the Arab world, although it controls many satellite channels that influence its followers. We also cannot overlook the Islamic interpretive battles that were fought by Islamic reformers such as Rifa’a al-Tahtawi, Imam Muhammad Abdu, Tahar al-Haddad and other Muslim revivalists.
Throughout Islamic history, Muslim women played a role and never lived in complete isolation. If we go back to the overlooked history of Islamic translations, we find that women played important roles in various fields, including religious knowledge. Muslim jurist Fatima al-Samarqandi, who lived in Aleppo in the 2nd century AH, studied the Islamic Hanafi doctrine from her father and memorized the hadiths that her father had collected. They issued religious edicts together.

There are many more women in Islamic history. Some women who lived in the 16th century knew Islamic law, one of them reaching the rank of Islamic jurist. Also, the Damascene Sufi Sheika Aisha al-Ba’oniyyah bint Youssef (d. 1516) went to Cairo, where she was allowed to issue doctrinal opinions and teach. Hajima bint Hayyi al-Awsabiyyah (d. 701) was described as one of the most important female jurists in Damascus. She taught many men and enjoyed the trust of Caliph Abdul Malik bin Marwan, whom she regularly met in the Damascus mosque.

So while historical evidence confirms the role of women as Islamic jurists, it seems that the Salafists wish to ignore the fact that women’s conditions have changed. Perhaps because it threatens their masculinity. So they are turning more and more toward male-biased jurisprudence to control women. It is difficult for the Salafist discourse to change. They are haunted by the supposed sedition present within the female body and seek to reduce and control it by means of religious edicts.
In the Egyptian Salafist scene that followed the January 2011 revolution, there was a controversy regarding the running of veiled women for parliament. Several Salafist parties nominated women on their electoral lists based on a fatwa issued by Yasser Burhami, the head Salafist in Alexandria. He said that while “nominating women is negative, it is less negative than allowing into parliament those who wish to change Article 2 of the constitution. Moreover, the election law requires every electoral list to include at least one woman ... In principle, this is not allowed. But fatwas in modern times are not absolute. We have said that Islamist parties, including the Al-Nour party, are not forbidden from nominating women in order to ward off the evil of leaving parliament for liberals and secularists, who would write a constitution that would fight Islam, restrict the Islamic call, and even prevent and punish it.”

The Salafists are obsessed with women and are trying to exclude them from public space because women have been increasingly active in the Arab revolts, especially in Egypt and Tunisia. The “phobia” against active women are making Salafists tighten their control over them by using the Islamic concepts of halal and haram. Most fatwas issued in Arab countries are directly related to women’s bodies, which constitute fertile ground for Salafist imagination.
The Salafists have broken with the notion of equality promulgated in the Quran. They have misinterpreted Islamic texts and are going against the enlightened reformist jurisprudence regarding women. This “Bedouin Islam,” as described by Sheikh Mohammed al-Ghazali, cannot deal with historical changes because it is bound by an exclusionary vision.