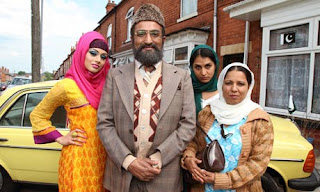 Comment: I actually thought it was funny, esp the second episode, I can't understand why people are taking it so seriously, there have been far more Islamophobic, stereotypical and harmful depictions of Muslims....  "Another week, another episode and ongoing furore over the controversial new BBC 'British Asian' (read 'Pakistani Muslim') sitcom Citizen Khan, which follows the life of a self-appointed ' Muslim community leader' and his British-Pakistani family in Birmingham. Following the hyperbolic gush surrounding its airing, it has prompted an outpouring of derision and delight in equal measure.
From comments about the banality of its comedic value to outrage as it pokes fun at Muslim religious practices and family values, the debate carries on. Ofcom is now launching an investigation to see whether the BBC has broken any UK broadcasting rules relating to viewer harm and offence, after receiving complaints that it sterotypes Muslims and insults Islam. Reaction to those who raise concerns have been marked. On the one hand, there are those like the former Apprentice runner-up Saira Khan who has said that British Muslims, like any mature community should be able to laugh at itself, and the scenes depicted in the comedy are recognisable in everyday Muslim experience and observation.
On the other, there are those such as the Telegraph's Christine Odone, who asserts that the sitcom is the 'Tebbit cricket test for Muslims'- if the two million strong community can't laugh at Citizen Khan and by default at themselves, then they can't claim to be truly British.Astonishingly, she goes on to suggest that the sitcom gives Muslims a chance to fight the image of self-righteous fundamentalists who are forever on the margins. Eh? Let's clearly embrace some Uncle Tom and orientalist tomfoolery to finally dispel that myth. My problem with Citizen Khan, aside from its conceit to be great comedy is that it is outdated, lazy and offensive. Some may find it humorous, but its humour has a pernicious underbelly in its over simplified, radicalised and distorted picture of Britain's diverse Pakistani community, who make up one million of the 2.4 Muslims in the UK. It perpetuates stereotyping in ways that lead to racism and many other types of prejudice and discrimination. A report on religion and belief, published last month by the Equalities and Human Rights Commission in this context makes sobering reading.
It highlights a clear trend pointing to the greater prevalence of discrimination, by any measure, against Muslims compared to other groups defined by their religion. Moreover, research evidence consistently shows that in the UK, Muslims experience discrimination of a greater frequency and seriousness than other religious groups. For instance, in a 2009-10 government survey of adults in England, 17 per cent of Muslims considered that racial or religious harassment was a big problem in the local area, compared to six per cent of Christians, and an average of seven per cent for other religions.
While this has been attributed to the impact of skin colour, it has also been related to the popular perception that Muslims are culturally and religiously 'alien' in relation to the dominent culture. Such anti-Muslim discrimination also appears to have increased in a politically charged climate where unsettled debates about multiculturalism have become intertwined with concerns about violent and non-violent Islamic 'extremism,' and the perceived segregation of communities with distinct social values - providing leverage for far-right nationalist sentiment, deftly deployed by the likes of the English Defence League across many areas of Britain.
Comedy has often grappled with religion; note the popularism of Father Ted and The Vicar of Dibley, which work well because they are witty and well-written. Playing with stereotypes can make for close-to-the-bone comedy, just look at Chris Morris's acerbic and provocative Four Lions, which received critical acclaim from many quarters. It did so because it dealt with religious and culturally sensitive topics with intelligence and nuance. Where the writer and star of Citizen Khan, Adil Ray, falls in his offer of a banal and tedious rendition of 1970s sitcom Mind Your Language. Moreover, in his claims that his sitcom is socially neutral, he misses an important point: it has ramifications in light of a racially and politically charged climate." Source
Posted by Zafar Khan at 10:00