An experience of Eid Bayan... 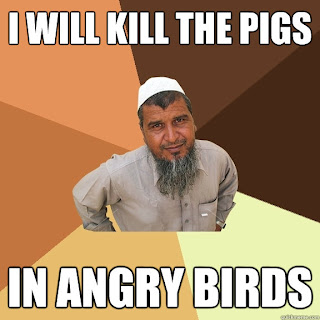 Dude what a crap sermon we had today before Eid Namaz ... Some 25 year old, who was banging on about how we are all Part time Mozzies and how you should all be having the beard as its supposedly not a choice and how all London are running around chasing money and doing 16 hour taxi cab shifts rather than doing Namaz etc etc the list goes on, and saying how successful the Muslim Empires are, and th

en finishing with how people should dress in 7th century garb etc not in suits and how Muslim men listen too much to their women and Muslim women need to serve their Husbands and not demand too much from them and they should be quite like a good obedient Pakistani wife, as Western Muslim women are too outspoken and liberal bad Muslims.
He then said, those people that did not fast, pray, pay zakat or go on Umra and Hajj are all Bad Muslims and today God does not need your Eid Namaz so you might as well leave the Mosque... LOL WTF Then he said Music singing and Dancing to Bollywood music is Haram ... OMG I was like calm down dude !

All I have to say is "Wo be unto the fault finder". So this jumped up twat is from Bradford, were ironically up north taxi drivers seem to give their white female passengers a bit too much of a personal service, and secondly how does he assume that we are all taxi drivers, thirdly when did the beard become compulsory, and when did wearing the fashion of the 7th century become compulsory? If Muslim Empires are so successful in his eyes, then why are the Moguls, Ottomans, Persians, Moors etc not around ? The bloke sitting next to me said, this crazy Bradford dude keeps telling me to come to do all Namaz's today as there is a Hadith that I will get so much reward, yet my wife is begging me to go out to meet family shopping and a nice meal, plus she has been sexually starved for a whole month, he said what ever happened to the Hadith that said, the best among you is those who is good to their wives and listens to women's needs? And moreover, what if I am in Safar (travel) could I not do Namaz later on? Someone else at the back of the Mosque shouted out at him, but what if you can't observe roza due to ill health and can not pray in Jammat in Mosque as your sick, or are too poor to pay zakat or can not afford to do Umra or Hajj as your families needs come first as charity begins at home... LOL and he was like DONT MAKE EXCUSES BROTHERS... LOL what an immature misogynistic brother ! What he failed to realise in regards music and dance is that, when a Byzantine Christian delegation from Abyssinia went to Medina to visit Mohammed (pbuh) did they not perform Music and dance in the courtyard of Median while Aisha watched on as well? Blessed be Ansari Women as modesty did not prevent them from seeking guidance in matters pertaining to faith. Lets just say Ansari women were Hot blooded feisty like Spanish women and Latino's, not afraid to ask direct questions of anyone.

Thank God this jumped up young zealatory Bradford guy, was not taking the Namaz!
On the way out of the Mosque, people figured out why he wants Muslim to wear 7th century clothes and study the Empires of past ... as he was handing out his business cards for his Islamic Emporium business LOL but not a lot people were shaking his hand or even greeting him... I think a lot of people not just me, were a bit pissed at this dude and thinking WTF and how did anyone on the Mosque Committee let him have the warm up act before the prayer? Shame on the Committee if this is the type of person they are trying to get to indoctrinate young boys and girls.
Posted by Zafar Khan at 17:12