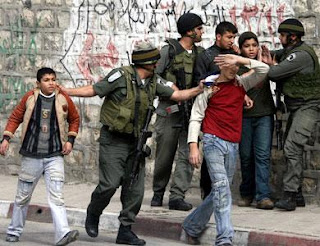 The Foreign Office revealed last night that it would be challenging the Israelis over their treatment of Palestinian children after a report by a delegation of senior British lawyers revealed unconscionable practices, such as hooding and the use of leg irons.


In the first investigation of its kind, a team of nine senior legal figures examined how Palestinians as young as 12 were treated when arrested. Their shocking report Children in Military Custody details claims that youngsters are dragged from their beds in the middle of the night, have their wrists bound behind their backs, and are blindfolded and made to kneel or lie face down in military vehicles.
Children from the West Bank are held in conditions that could amount to torture, such as solitary confinement, with little or no access to their parents. They can be forced to stay awake before being verbally as well as physically abused and coerced into signing confessions they cannot read.
The team – led by Sir Stephen Sedley, a former Court of Appeal judge – heard that "every Palestinian child is treated like a potential terrorist". In a damning conclusion, the report points out repeated breaches of the United Nations Convention on the Rights of the Child, which prohibits cruel, inhuman and degrading treatment.
"We were sitting in court and saw a section of a preliminary hearing when a very young looking child, a boy, was brought in wearing a brown uniform with leg irons on. We were shocked by that. This was a situation where we had been invited into the military courts for briefings from senior judges," explained one of the report's authors, human rights barrister Greg Davies. "To hold children routinely and for substantial periods in solitary confinement would, if it occurred, be capable of amounting to torture," the report said. Last night the Foreign Office, which backed the report, said it would be taking up the claims with the Israeli authorities:

"The UK government has had long-standing concerns about the treatment of Palestinian children in Israeli detention, and as a result decided to fund this independent report. While recognising that some positive recent steps have been made by the Israeli authorities, we share many of the report's concerns, and will continue to lobby for further improvements."
While the legal team said it was in no position to prove the truth of the claims of cruelty made repeatedly by Palestinian children, but denied by the Israeli authorities – which offered unprecedented access to the delegation – it pointed to the disparity in the law.

Israeli children must have access to a lawyer within 48 hours and cannot be imprisoned under the age of 14. But Palestinian children as young as 12 are jailed and can be kept for three months without legal representation. Between 500 and 700 are jailed each year.
"The other shocking thing is they are incarcerated in breach of many conventions. The practical effect is parents can't get there because they can't get permits," said Marianna Hildyard QC.
While the investigating team welcomed improvements introduced by the Israeli authorities, both Palestinian and Israeli lawyers on the ground insisted much of it was "rhetoric ra ther than real change".
Last night, Israeli Embassy spokesperson Amir Ofek said the country appreciated the efforts of the delegation but blamed Palestinians who "glorify terrorism". He said: "As a result [children] are frequently involved in lethal acts. With the Palestinian Authority unable or unwilling to meet its obligation to investigate and prosecute these offences, Israel has no choice but to do so itself.
"Israel notes the detailed recommendations in the report and will study them closely as part of its ongoing efforts to find the most appropriate balance between preventing violence and treating perpetrators with humanity."  Source

The report details claims children are dragged from their beds, bound and blindfolded:
www.childreninmilitarycustody.org
Posted by Zafar Khan at 12:40