Sex slaves sold in the name of religion 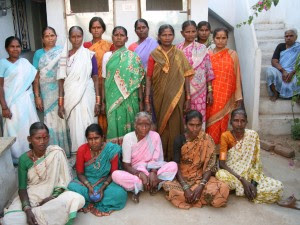 Once upon a time there was a woman who was the wife of a great Hindu sage. The sage and his wife had taken a vow of celibacy. One day she was at the river and she saw two sprites “frolicking” with each other. She wished that she and her husband could be sexually free too. The husband sensed her sexual desires and was so angry he ordered her to be beheaded. However, the sage bitterly regretted the decision, so he tried to fix it. He found the head of another woman from the lowest caste, and attached this to his wife’s body. She was resurrected, but instead of staying with her husband, she roamed by the river, a liberated, sexually free woman, like the sprites. She became the goddess “Yellama” and lived happily ever after.

This is the story told to some of the young girls in Southern India, in the region of Andhra Pradesh, where Yellamma is the patron goddess. At the age of between five and ten they are dedicated to the goddess in a special marriage ceremony, where they are given pretty clothes, strewn with petals, offered gifts and then forced to become sex slaves.

They are too young to fully comprehend what is happening to them until the ceremony is over and their fate is sealed. Saimma, aged 40 explains: *”I felt happy and great as a child saying that I am married and I used to say all the other children, ‘you also should get married to the goddess and then you will get new clothes and can have thali in your neck like me’. Only later did I realise what is the marriage really. In our society, if you have a husband you also have respect, but we die of shame.”

Venkatamma, 45, says, “My mother told me I was the goddess of our villagers. With time I came to know that what type of goddess I was. All are playing games with our life. Today we are living by dying. In the society we don’t have respect and we are subservient to everyone.”

The girls who have been put through this dedication ceremony are known as “Jogini”. Estimates say that 17000 girls are Jogini. They have the glamourous image of being a temple prostitiute, and like Yellama, they will never marry, which to outsiders gives an impression of freedom, but they will always be Jogini and cannot escape their fate. Although there are no physical restraints on them, the community will shun them if they try to take another profession.

“Sometimes they are locked in rooms and battered until they have no will to escape,” explains Dr Beryl D’souza Vali, the Director of Anti-Trafficking at Pratigya India, a charity which campaigns for an end to slavery in India. “But after that they are seen as a sex worker and there is no escaping that, so they are exploited at that level, even if they try to do something else, they will always be a sex worker.”

The young girls usually come from the lowest caste, the Dalits (‘untouchables’). Dalits have few rights and the majority live in extreme poverty. The practice of selling their children as Jogini is said to bring good luck to the families and they are also given a very small percentage of the money made from the sale of the child.

Ashamma, 45, was made a Jogini when she was eight years old. “My father was blind since birth. They made me a Jogini to get financial support. But I still have to go begging with my son because of my horrible situation and lack of food.”

D’souza Vali says that often the men involved in buying the girls are often respected members of society. ”There are stakeholders; they are people from the sex trade industry – politicians, religious leaders or prominent locals,” she explains, “the brothels in larger cities usually get a religious middle man in the village to visit the family to say this should happen.”

The only “escape” from being a Jogini comes from no longer being useful for sex, says D’souza Vali: ”Eventually they have had several children and contracted HIV and Aids, so they are no longer working, then they escape it”.

Jogini women sometimes dedicate their own daughters, because once they stop being useful as Jogini, there is no other way to get an income, or their children are taken and made into Jogini.

Savithramma, 22, was made a Jogini by her mother and grandmother after she gave birth to an illigitimate child when she was 14. “ I asked him after the child birth to marry me but he didn’t respond to me. So, my mother took me to temple and made my avva (grandmother) to tie thali to me. From that time onward all give me the title jogini. ”

Laws do exist to protect the girls and women, but are rarely enforced. In the 1930s the British were the first ones who challenged the system and outlawed it. This was seen as disrespectful to the religious customs and culturally unaware. In some ways the law backfired and simply made Jogini life much harder. “One Jogini told me that the women used to enjoy a much higher patronage and they were like the Geisha girls in Japan” explains D’souza Vali. “They could do their own thing and not have to be married. It’s true that after the law was introduced they had to be more secretive and so exploitation increased.”

Later, in 1983, those laws were strengthened, but did not have an effect. D’souza Vali says there has not been a case using these protective laws for the last five years. “It’s hard to look at something clearly that is so entrenched with culture and religion, so what happens is a Jogini may get some but not enough help. The police themselves are not always aware of the law or are aware, but don’t really know how to implement the law.”

Malcolm Egner, of the Dalit Freedom Network (DFN), a charity that helps Dalit people (low-caste people) across the world to fight injustice against their caste, says there are many other barriers to getting help. “In some parts of India, Dalits are not allowed into police stations.” D’souza Vali explains, ”In 95 per cent of cases, if a Dalit woman goes to the police they won’t be helped. They are likely to get further harassment. In the unlikely case that the police are helpful there may be other barriers.”

Against all the barriers, a small group of ex-Jogini women are finally speaking out against the tradition. DFN is currently working with Pratigya India, D’souza Vali’s organisation, on a 12-month project in the region to help these women to help educate the Jogini and their families about their legal rights and also to intervene before the dedication ceremonies take place. The stories of abuse go on, but with some help, the ex-Jogini activists are working to prevent this abuse happening in the future. “They want an alternate life for their descendents,” says D’souza Vali.

To find out more or support the campaign visit www.dfn.org.uk or www.pratigyaindia.org source
Posted by Zafar Khan at 10:00