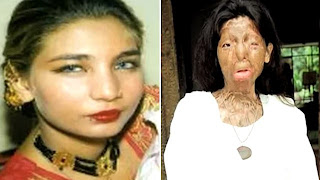 Fakhra Yunus, acid victim of former MPA Bilal Khar, was laid to rest in Karachi on Sunday after her funeral prayers were held at Edhi Centre.
Her body reached Karachi airport from Italy earlier during the day amid protests led by the Muttahida Qaumi Movement (MQM).

Yunus leapt off from the sixth floor of a building on March 17, 2012 in Italy which resulted in her death. She was provided shelter in Italy after being attacked by her husband 12 years back in Karachi.
Female workers of MQM gathered at Jinnah International Airport holding placards and chanting slogans against Khar, who is also the son of former Punjab governor Mustafa Khar.

MQM leader Altaf Hussain has taken immediate notice of the incident and demanded that Khar be ‘severely punished’ for his acts. Other MQM leaders have also demanded action be taken against the former Punjab chief minister and veteran politician Mustafa Khar’s son Bilal Khar.
“There is a termite, which is eating our country from within; it is the feudal system,” remarked MQM leader Khushbakht Shujaat during the protest.
Iconic humanitarian worker Abdul Sattar Edhi was also present at the Karachi airport to receive Yunus’ body.

Edhi also held the prevalent feudal system in the country to be responsible for such incidents. “They still oppress women the way it happened 8,000 years ago… they consider women to be their properties.”
Tehmina Durrani, who had helped Yunus find refuge in Italy, arrived at the airport along with Yunus’ family. Yunus’ son had handed over the funeral responsibilities to Durrani.
Speaking to the media, Durrani said that Yunus had lived her life with courage. In earlier interviews, Yunus had expressed her desire to return to Pakistan to seek justice.

Musarrat Misbah, a veteran beautician and owner of Depilex Smile Again Foundation For Acid Burn Victims was also present at the airport.
Meanwhile, Sindh Home Minister Manzoor Wasan has announced reopening of Yunus case.
The case
In 1998, Yunus was an 18-year-old resident of Napier Road’s Bulbul Bazar, Karachi’s red light district, when she met the then Muzaffargarh MPA Bilal Khar.
Shortly after the marriage, Yunus faced both physical and mental abuse by Khar, which lasted for three years before she eventually escaped and moved in with her mother.

An infuriated Khar allegedly took ‘revenge’ by pouring acid over her on May 14, 2000, as her five year old son watched. The attack left her severely burned, particularly her face. She, however, survived the attack but not before spending three months in intensive care.
Khar used his political influence to evade arrest and absconded, while Yunus’s family faced difficulty in registering an FIR against him.
On October 31, 2002, Khar was eventually arrested, but released in 2003 on Rs 200,000 bail.