Arrogance is the most insidious disease of the heart 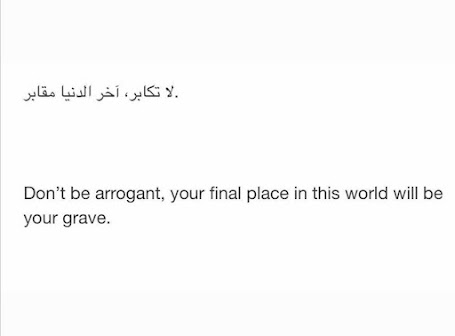 Arrogance is the most insidious disease of the heart and their effects are reflected in the behavior and conduct of the sick person preventing them from entering Paradise. In the authentic Hadith reported by Imams Muslim and At-Tirmidhi, the Prophet (peace be upon him) said, “One will not enter Paradise, if one has an atom’s weight of arrogance in his/her heart.”

According to this Hadith, arrogance is one of the major sins because it prevents a person from entering Paradise on the Day of Judgment. It is also clear that arrogance is from the diseases of the heart, as also the degree of arrogance varies. The heart can be filled with arrogance, or can have only an atom’s weight of arrogance.

Several verses and authentic Hadiths were revealed censuring arrogance and elucidating its danger.
First, what is arrogance? The Prophet (peace be upon him) defined it in an authentic Hadith reported by Imams Muslim and At-Tirmidhi, “One will not enter Paradise, if one has an atom’s weight of arrogance in his/her heart.” A man asked, “One may love his clothes to look good and his shoes to look good” The Prophet replied, “Allah is beautiful and loves beauty, arrogance is rejecting Truth and looking down on people.”

Hellfire is abode of the arrogant people. This is emphasized in the Hadith of the Prophet (peace be upon him) that is reported by Imam Muslim, “Paradise and Hellfire argued. Hellfire said: Inside me are the merciless and the arrogant people … and Allah has judged between them:… You (Hellfire) are my torture, with you I torture whom I will….”
Allah Almighty turns the arrogant people away from being guided with his signs. He, the Almighty, says “I shall turn away from My Ayah (verses of the Qur’an) those who behave arrogantly on the earth, in a wrongful manner.” (Qur’an, 7:146)

The most severe arrogance is being arrogant against Allah and rejecting submission and worshipping Him. Allah Almighty says, “Verily! Those who disdain My worship (because of arrogance), they will surely enter Hell in humiliation!” (Qur’an, 40:60)

From arrogance is being arrogant against the messengers and rejecting their message and not following them just because they are humans. This is the case of many non-believers about whom Allah Almighty says, “They said: ‘Shall we believe in two men like ourselves.” (Qur’an, 23:47) and “They said to their messengers: “You are no more than human beings like us.” (Qur’an, 14:10)
The tribe of Quraish also said, when it rejected and looked down on the Prophet Muhammad (peace be upon him) because he was an orphan and poor, as Allah Almighty said, “And they say: ‘Why is not this Qur’an sent down to some great man of the two towns (Makkah and Taif)’.” (Qur’an, 43:31)
While describing the real situation of the disbelievers, Allah Almighty says: “And they belied them (those Ayat) wrongfully and arrogantly, though their ownselves were convinced thereof (i.e. those Ayahs are from Allah).” (Qur’an, 27:14)

Allah Almighty explicated for us that arrogance is an exclusive attribute of Himself. In a Qudsi Hadith reported by Imam Muslim that Allah Almighty says, “Dignity is my lower garment, and arrogance is my covering. If anyone competes with Me in either of these two, surely I torture him.” Allah Almighty says, “And do not turn your face away from men with arrogance, nor walk in insolence through the earth. Verily, Allah does not like each arrogant boaster.” (Qur’an, 31:18)

Allah does not like the one who is conceited and arrogant. The Prophet (peace be upon him) says what was reported by Imams Bukhari and Muslim, “While a man was showing off his garment, he looked proudly to himself, all of a sudden, Allah immediately crumbled the earth underneath him, and he is still dropping with struggle through it till the Day of Judgment.”

Allah Almighty will not look with mercy, on the Day of Judgment, at the one who lengthened his clothes out of arrogance. The Prophet (peace be upon him) says reported by Imams Bukhari, Muslim, and other, “Whosoever drags his clothes out of arrogance, Allah will not look at him on the Day of Judgment.” Abu Bakr said: “O Messenger of Allah, my garment slips (slightly off his waist) to the ground but I lift it!?” The Prophet replied, “You are not among those who do it out of arrogance.”
After we have heard all these verses and Hadiths about the dangers of arrogance and how bad the consequences are, we should be cautioned and get away from it and from its effects and its characteristics. So we teach ourselves to follow the truth when we know it, and humble ourselves in front of others. Imam Muslim reported that the Prophet (peace be upon him) said, “....And no one has humbled himself for the sake of Allah, but Allah has elevated him.”

The Prophet (peace be upon him) is the best example of humility in his life. Imams Bukhari and Muslim reported that “The prophet used to pass by children and give Salaam to them (greet them).” Imam Bukhari reported that, “A female slave from Madinah use to take the Prophet’s sleeve and take him wherever she wants.” Imam Bukhari also reported, “That the Prophet used to be at the service of his family.”