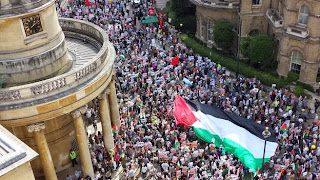 The first time I experienced this reality I was 17 years old, a freshman in college, and the only engineering major on the staff of my university newspaper. I wrote a *response* to a long article by a student who had spent the summer in the IDF and recounted their experience with the “faceless soldiers who were defending the only democracy in the Middle East.” The article had countless factual errors about the history of the occupation, as well as the current (at the time) reality. I did a point by point rebuttal and my editor said it was a masterpiece. He ran the piece prominently.

I started getting hate mail. I was called a terrorist whore. I was called a killer of Israeli children. The responses to my article poured in in a seemingly coordinated campaign. They were all published in my paper’s opposition newspaper. Like 5 a day! About my article. For at least two or three weeks. For about a month I was the most famous person on my campus of 40,000 students. The irony was that the onslaught backfired.  Alot of my professors had not read my article, but saw the avalanche of responses, which lead them to read it, and told me it was very persuasive.

Then my editor started getting calls. Not from students or faculty, but from big donors and advertisers warning him to issue a recant of the article or apology or they would pull their funding and ads, blackmailing a 20 year old with literal bankruptcy of his college paper if he didn’t make sure the opinion section had the proper views about Palestine.

What happened? I was 17 and alone and terrified. My parents were terrified for me (they worked at the same university). I stopped writing about Palestine. I stopped writing about anything for months despite my editor begging me to come back. To my amazement and eternal gratitude, instead of apologizing, he published a piece exposing the threats he was getting. He told me later he had never seen or experienced that kind of bullying and censorship about anything he had ever worked on.
This is a very small window into one tiny incident where the stakes were so low. Imagine what it looks like when you’re a member of Congress, a writer for a major newspaper, or anyone else with influence.
We simply are not able to speak freely about Palestine in this country without facing very real negative consequences. Our media has a documented and severe bias.

Email ThisBlogThis!Share to TwitterShare to FacebookShare to Pinterest
Labels: Freedom of Speech, Palestine will be free, Zionist Lobby