Hello, Brother: Why Kiwis are converting to Islam 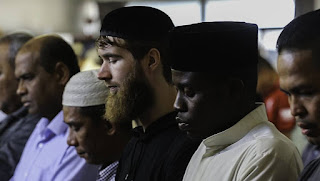 Following the Christchurch mosque attacks, Kiwis are more interested than ever in the Muslim world. But what about those who had already converted? Greer Berry talks to a man who says he's the only Māori Muslim in Manawatū about why he converted to the religion.

Colin was in the car with his daughter when he knew he had to tell her.

She had come to pick him up to go somewhere, but instead, he asked if they could swing by the mosque on Cook St in Palmerston North.

It was March 15, a day etched in all Kiwis' memories, especially those in Christchurch.

Overcome with emotion, Colin decided now was the time he had to come clean.

"On the way there I said: 'I've got to tell you something,'" the 59-year-old remembers, becoming upset at his recollections.

For the first time, Colin revealed to those closest to him that he had converted to Islam the year before.

"She was good, but she was upset because I hadn't told her."

He's a private person and it was a private journey for him, so he had never felt the need to tell others about his decision.

Colin was also worried about what others would say or think, about being judged and misunderstood. It's something he still worries about.

On this day, the terrorist attack had changed that. He felt like he needed to share his newfound faith with his three children, "just in case".

"It was hard, but the Muslim community is strong. It was because of that that I thought: 'I've got to tell my kids'.

"I know the kids, no matter what I do, will support me," he says.

"Now they know, it's really good, they're really supportive."

Colin's road to conversion is one many others have found themselves on.

He was going through a hard time and was looking for a sense of belonging and contentment, and in Islam, he found that.

The religion is the fastest-growing faith in the world.

There aren't official figures on the number of people in New Zealand converting, but anecdotally, mosques around the country are reporting an increase in those attending prayers and interested in finding out more about the religion.

Following the Christchurch attacks, a Wellington mosque was reporting three to five people a day converting, and other mosques similarly reported running out of printed material aimed at educating others about Islam.

The Manawatū Muslims Association is trying to establish a group to arrange a database of new converts, something to keep track of the faith's latest followers.

Friday prayers at the mosque have swelled following the Christchurch attacks.

Association president Riyaz Rehman says there's a sense of people wanting to come together more, to bond over their shared faith, to feel safe and a strength in numbers.

Those numbers were replicated during the religious holiday known as Eid, where Muslims come together to break their fast following the holy month of Ramadan.

Association member Zulfiqar Butt says the idea about grouping together potential new converts is so that they can band together to support each other in their newfound faith.

Butt has been buoyed by the upsurge in interest in Islam and says he hopes anyone who wants to know more will visit.

"There is certainly an increase," he says, from all backgrounds, with their own stories to tell.

"Even yesterday we were approached by a transgender person, wondering if they were welcome. And I said: 'Of course, you are very welcome'."

And he arranged one of the association's members to show them around and support them.

Colin says he's noticed a few new converts over the past few months.

"They're trying to get a convert group together so we can all meet up now and then, talk about the hassles and troubles we've had and how we can get through them."