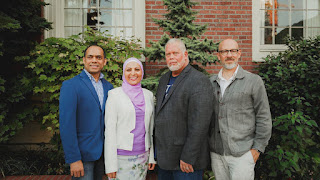 Richard “Mac” McKinney returned from his tours in Somalia and the Middle East consumed with rage. The Marine had tracked his enemy kills with little tear-drop tattoos on his arm. He stopped counting at 26.

After 25 years of military service, his transition to civilian life in his hometown of Muncie, Indiana, did not go well. He was injured inside and out. He remembers wanting to kill burka-clad women he saw in a local shoe store.

He made a plan to kill Muslims at the local mosque. He would plant a homemade bomb and then watch the scene unfold from a parking lot across the street. But when he visited the mosque, his life changed. Someone welcomed him and handed him a Quran and asked him to come back with any questions. Which he did many times.

Two months later he became a Muslim and eventually served as president of the Islamic Center of Muncie. In April, the almost-terrorist told his story in a short video as part of “The Secret Life of Muslims” web series. The first-person webisodes include a variety of Muslims — actors, athletes, artists, journalists — and have been viewed more than 60 million times in the last two years.

McKinney and filmmaker Josh Seftel will screen episodes from “The Secret Life of Muslims” at this weekend’s Original Thinkers festival, which blends film, art and performances with panels to stimulate discussion and exploration. McKinney and Seftel will join filmmaker Orlando von Einsiedel — he won an Oscar in 2016 for his documentary “The White Helmets,” which followed Syrian civilian rescue workers — and journalists Yael Lavie and Nadia Naviwala on a panel discussing examples of human decency battling humanity’s horrors.

Seftel, whose “The Secret Life of Muslims” was nominated for an Emmy in 2017 and whose directing career includes two seasons of “Queer Eye for the Straight Guy” and the feature film “War, Inc.,” is a veteran of the film festival circuit, with his documentaries and films feted at top events around the world.

“I feel like Original Thinkers is becoming one of the great things to do in the fall if you are part of that world and you are into arts and culture,” Seftel said.

McKinnon celebrated his 10th year as a Muslim last month. And just like that day he first visited the Islamic Center of Muncie changed his life, his path veered again when Seftel released his 5-minute video. McKinney has spent the last several months traveling the country, speaking to groups and seeding hope.

“People come up to me with tears in their eyes. One time a guy told me I saved his life because he was going to commit suicide. It’s been really powerful,” he said.

Most viewers see “The Secret Life of Muslims” episodes online. But as its popularity has grown, Seftel has taken his show on the road, attending events like Original Thinkers with McKinney and other subjects from his episodes.

Like Rais Bhuiyan, who was working at a gas station in Dallas when a man shot him in the face following the Sept. 11, 2001, terror attacks. When the man, who killed two South Asian store clerks on a post-9/11 rampage, was sentenced to death, Bhuiyan forgave the white supremacist shooter and even pleaded in court for clemency, citing Islam’s tenet that saving one person’s life is like saving all of mankind.

“We’ve done several of these now and you can hear an audible gasp in the room when people watch Mac’s story. It’s such an incredible seismic shift in his narrative,” Seftel said.

Reaction from the anonymous landscape of the internet can be different.

Typically, viewers give Seftel’s videos a positive response at a rate of about 60%. If it features a woman, it’s usually less.

“Which is pretty depressing and sad, but it’s a reality and that’s the world we live in,” Seftel said.

But for Mac’s story, which has been viewed more than 10 million times across a network of hosts, more than 9 million viewers have responded positively to the video, Seftel said.

“That is exciting to me because it has the potential to reach all kinds of people. It says that Mac is clearly a great ambassador and a great messenger and people listen to him and trust him,” Seftel said.

McKinney hopes viewers and attendees at Original Thinkers will ask the probing, tough questions. He wants to stimulate discussion.

“I tell everyone to ask me any question. I’ve been shot at, blown up and married four times,” he said. “You can’t hurt me.”