Why India’s Muslims are so moderate 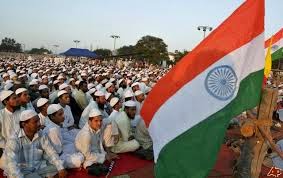 ON SEPTEMBER 3RD Ayman al-Zawahiri, al-Qaeda's chief, released a video message in which he promised to "raise the flag of jihad" across South Asia. Many analysts responded with little more than a shrug. The extremist group looks increasingly desperate. Since Osama bin Laden was killed in 2011, al-Qaeda’s impact has been limited. It is overshadowed by the brutal Islamic State in Syria and Iraq, which draws volunteer fighters from a wide range of countries and has said that Afghanistan and Pakistan will be brought under its yoke too. Yet the biggest reason for scepticism about al-Qaeda’s threat is that neither it, nor the IS, are likely to get support from more than a tiny handful of Muslims in India.

India’s Muslims are numerous, but moderate. Though barely 15% of the total, at some 180m they roughly number the same as Pakistan’s entire population. Many are disaffected. In the only Muslim-majority state, Kashmir, residents are embittered by years of heavy-handed rule by Indian security forces, and protests frequently erupt. Occasional terrorist attacks take place in Indian cities, blamed on a home-grown group, the Indian Mujahideen. In February 2013 a bomb attack in Hyderabad killed 16. But these attacks have been growing less frequent and less deadly, possibly because support from Pakistan has waned. Bursts of deadly religious violence, when Muslims and Hindus clash, also take place, most notably last year near a northern town, Muzaffarnagar, when at least 40 people were killed. India’s Muslims generally have reasons for some gloom: they endure lower levels of education, income, political representation or government jobs than the majority Hindus. And yet India’s Muslims, almost across the board, have remained moderate, tolerant, quick to condemn religious violence and ready to engage members of other religions. The contrast with the sectarian bloodletting, growing radicalism and deepening conservatism in Pakistan next door, for example, is striking.

A combination of factors explains it. Islam in South Asia has a long history, over 1,000 years, but was long dominated by Sufis who integrated closely with non-Muslim Hindus, sharing many cultural practices. In Pakistan, decades of large-scale migration to the Gulf along with close political ties to Saudi Arabia saw harder forms of Sunni Islam adopted, notably the spread of Wahhabi and Deobandi mosques, madrassas and beliefs. By contrast many Indian Muslim migrants to the Gulf, for example from Kerala, have proved less effective at reimporting harder-line forms of Islam on a large scale. Indian madrassas appear to be under more watchful eyes of the state. It is crucial, too, that India—unlike Pakistan and many other countries with large Muslim populations—has long remained as a robust and lively democracy. A secular constitution and the electoral clout of a sizeable minority helps give Muslims in India a stake in the political system. Many are also intensely proud to be Indian, even if a few support Pakistan’s cricket team. Targeted government welfare schemes to assist "backward" Muslim groups may help too. The election this year of Hindu nationalist, Narendra Modi, as prime minister has not cheered Indian Muslims. But his promise to treat the secular constitution as his "bible" helps to put a limit on anxiety. Perhaps as important, as Indian Muslims are widely dispersed around the country, they are in a small but not insignificant minority almost everywhere: that fact encourages both majority Hindus and Muslims mostly to rub along together, since extremism would prove disruptive for just about everyone.

Such moderation is obviously a boon, and prevents more communal violence. Even troubled Kashmir has for the past three years seen relative calm. A handful of Indian recruits have reportedly joined up with IS in the Middle East but because they are from a population of 180m that hardly looks significant (more worrying are reports of several young men joining the IS from increasingly hardline, Sunni-Islam Maldives). Yet moderation today is not a guarantee that extremism will not arise tomorrow in India. One additional reason at times given for India’s Muslims remaining moderate is that literacy rates and incomes have been low, leaving them relatively isolated from those global forces—such as jihadist websites and news of atrocities against Muslims in the Middle East—that help to spread rage elsewhere. Rising literacy, an ever-more urban population and growing wealth and information may yet encourage more extremist factions to emerge. Large migration flows to the Gulf might yet help to bring back more conservative Islamic beliefs and funds for Wahhabi mosques and madrassas. Similarly, if Hindu nationalists in power were to grow heavy-handed, a backlash and a rise in extremism are easy to imagine. The stability in India is a remarkable achievement. With luck, zealots and murderers such as al-Zawahiri will therefore fail in their desperate ambitions. But preserving stability will be a task for everyone.