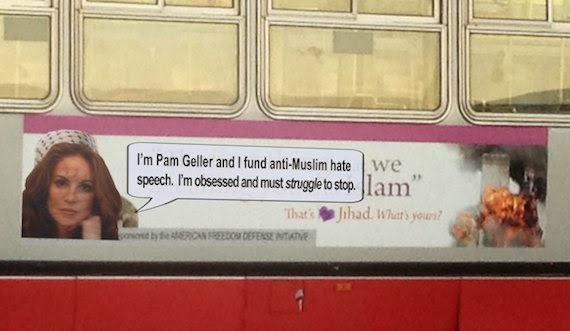 All New Yorkers of good will should be disgusted by Pamela Geller’s decision to plaster city buses with Islamophobic tripe effectively smearing all Muslims as being in league with ISIS, Hamas and even Hitler.

I say this not as a Muslim American, but as a Sikh who has strong differences of opinion with devout Muslims about theology and lifestyle choices.

But the fact is, my family owes its very survival to the tolerance of Muslims, and I feel I owe it to them to speak out on their behalf.

When the Indian subcontinent was divided between India and the new Muslim nation of Pakistan in 1947, fanatics in the Hindu, Muslim and Sikh communities used religion as an excuse to attempt genocide against each other.

Hundreds of thousands of people died. Millions were turned into refugees and driven to opposite sides of the border based on their religion.

During this upheaval, a devout Muslim protected my paternal grandparents and their children, providing them food and shelter for several months at considerable risk to his own life. He was a colleague of my grandfather at the china factory where they both worked. Sensing that my family’s life was in danger, he hid them in a barn on his property out of view of rampaging mobs. When the violence subsided, he delivered my family to safety.

It is convenient to blame all Muslims for uprooting my family from its ancestral home — just as it would be easy for Muslims to blame all Hindus and Sikhs for doing the same on the other side of the border — but nuance matters. My father was a year old, and the fact is that his life was saved by a Muslim. If his life had been cut short, my own life would not have been possible.

What makes Geller’s ads so troubling is not simply that they are juvenile and intellectually dishonest but that they dehumanize Muslims. In fact, they could even incite bigots to lash out against our fellow Americans.

These are not theoretical concerns. Earlier this month, Linda Sarsour — an American civil rights activist who wears a headscarf and happens to be Muslim — and one of her colleagues were accosted by a man in Brooklyn, who threatened to behead them.

In the last year, three turbaned Sikh Americans — Prabhjot Singh in Harlem, Sandeep Singh in Queens and Jaspreet Singh Batra on Roosevelt Island — experienced brutal physical assaults after being subjected to epithets, such as “terrorist” and “Osama Bin Laden.”

In December 2012, Sunando Sen — a Hindu American — lost his life after being shoved in front of a moving subway train in Queens by an assailant who declared that she hated Muslims and Hindus.

The First Amendment protects Geller’s right to be obnoxious, but she should be shamed for trying to combat anti-American extremists by publicly stereotyping entire groups of people and creating a climate of fear that could endanger the lives of innocent people.

There are fringe extremist groups in many religious communities throughout the world. ISIS, Al Qaeda and others are real threats to Americans. But they constitute a tiny fraction of the total population — which, in the case of Muslims, totals up to 1 million in New York City and more than 1 billion globally.

Nor is it the case that moderate Muslims are failing to condemn extremists. The devout Muslims I know are disgusted with these groups.

By pandering to the lowest common denominator, Geller is failing to acknowledge the devout Muslims who are working full-time to combat extremism and promote secular, pluralistic democracies in Muslim-majority countries.

A Muslim stood up for my family two generations ago and made it possible for us to thrive. Now, all of us should stand up for our Muslim brothers and sisters so that they can live in peace.

Singh is director of law and policy at the Sikh Coalition, the largest Sikh American civil rights organization in the United States.