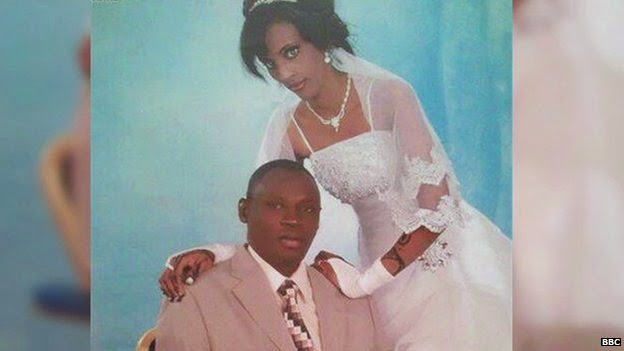 What a disgrace!! A great injustice and an example of oppression and patriarchy is woman was never Muslim her monther is Christian and she raised her Christian her Muslims father was absent!! Yet men decide she must ber Muslims and hasa apostasized! I'm so disgusted.

A heavily pregnant young woman has been sentenced to death in Sudan for renouncing Islam and marrying a Christian man, in a case which has attracted global condemnation.

Meriam Yehya Ibrahim, 27, was told by a court in Khartoum she would be hanged for committing apostasy by leaving Islam and becoming a Christian. She was also sentenced to 100 lashes for marrying a non-Muslim, which constitutes adultery under Sudanese law.
Mrs Ibrahim is eight months pregnant and has been held since February in Omdurman Federal Women’s Prison, north of Khartoum, with her 18-month-old son Martin. On Sunday she was told that she had three days to recant her faith or face death, but appearing in court yesterday she refused, saying she had always been a Christian.

According to human rights organisation Christian Solidarity Worldwide, Mrs Ibrahim was born in western Sudan to Muslim father and a Christian mother. Her father left when she was six, so her mother raised her as a Christian. She married Daniel Wani, a Christian from southern Sudan who has US citizenship, in 2011.
The charity added that three witnesses from western Sudan had travelled to the hearing to testify that Mrs Ibrahim had always been a Christian, but were prevented from giving evidence.

It is understood that the death sentence will not be enacted for two years after she has given birth, but that the punishment of 100 lashes could be carried out as soon as her baby is born. Mrs Ibrahim’s lawyers are intending to launch an appeal, which could take several months.