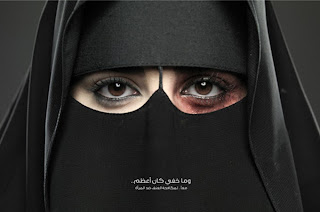 When women are considered simplyfitnah-full temptresses and seductresses in need of being controlled not actually feeling human beings. :(


When commenting on a piece of news stating that young harassers have been detained in Saudi Arabia, an official said the relevant authorities will investigate harassment cases and will not rush at making judgments because sometimes girls are to blame for being harassed.
According to him, nail polish can seduce men and can be interpreted as a call to be harassed; therefore any girl who exposes her eyes or face or wears her abaya in an unusual style or goes out with her colleagues to have lunch near her workplace - like what happened with the Khobar girls - must blame themselves for being harassed by men. This understanding of violence was confirmed by a statement made by head of the court of appeal as he said that women leaving their homes to go to the market or to work is one of the reasons behind abusing her. But this does not mean that women who stay home will be safe from abuse.
The Protection from Abuse department confirmed in a statement that it cannot respond to the requests made by women abused in their homes after 10:00 p.m. Meaning, even women who stay home are not safe from abuse. If women are abused at home after 10 p.m., the social affairs ministry cannot protect them and cannot force men who abuse their wives or children from abstaining to resort to violence after 10 p.m.
Following all these “official” statements, we understand that violence against women is justified according to men’s mood. So if a man runs into a girl whose nails are polished or who’s wearing eye make-up, he’s the one to decide whether she deserves to be abused or not?
Timing is also important when it comes to this issue as the situation is different between women who leave their houses in the evening and women who leave their houses in the morning. But there are even different opinions regarding this. For example, if a girl goes out with her friends to the mall for lunch and men happened to pass by, then the girls deserve to be abused. But according to the head of the court of appeal, leaving the house in the first place justifies abuse against women. For some policemen, if a man abuses his wife, then he’s disciplining her.
The paradox which always crosses my mind is this. When a wife reports her husband to the police because he beat her up, the police tells her it’s a family problem and not a legal one. But if she goes to her brother for help and if the latter beats up her husband, the police intervenes and considers the incident as a felony.
In other words, when two men fight, regardless of kinship, it’s considered a harmful act banned by law. But if this violent act is practiced against a woman, the issue becomes as philosophical as that of what came first, the chicken or the egg. Don’t be surprised that a girl is also held responsible if she’s raped.