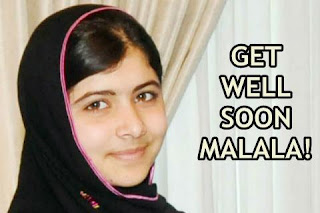 Everyone please pray for Malala, she is a true heroine of our times.

Sabbiyah Pervez is a voice from Bradford on the shooting of a brave young woman.


Education is a privilege that we take for granted here in the UK. We take for granted that it is compulsory and we take for granted that up until the age of 18 it is free. We take for granted the fact that we do not have to fight for our education, we do not have to struggle for it and most importantly we do not have to risk our lives for it. But there are many for whom such struggles are a constant reality. Many like Malala Yousafzai, who have that privilege stolen from them and for whom education is deemed unnecessary.
The issue regarding women being educated is one that has been prevalent throughout the ages, stemming largely from the belief that by educating a woman you are doing more harm then good, a view that still exists in fragments today within our own society. Many women will tell you that men feel intimidated by their knowledge or expertise in a certain field, indicating that the archaic view of the man being the dominant leader and omniscient, is still apparent within us.
I recall my grandmother narrating to us, that her eldest brother pulled her out of school when she hit puberty; she stated that he was concerned that if she continued to be educated she would not marry the man who was betrothed to her. My grandfather is significantly older then my grandmother and was a divorcee. When asked how she felt about her brothers decision, my grandmother replied she was furious but later saw the wisdom of his decision; she would definitely have not married my grandfather if she had continued her education.
As a young third generation British Asian girl growing up in Bradford, I encountered this backward mentality directed to my parents from some within my own community. Many stated that I did not need to be educated. Instead I should be educated to the bare minimum and be married off at an early age in order to remove myself as a burden from my parents. Others argued that if I was educated "too much" I would become difficult to control and education would grant me "too much" freedom, it would be hard then for me to conform to the expectations many had set for me. Fortunately I can tell you they were right. My education educated and liberated me, it allowed me to critically analyse the problems that i saw around me and to openly question and challenge them. My questions brought discomfort and I was regularly cautioned by elder members of my community for asking "too many questions." Unfortunately, I know of many girls here in the UK, who are pulled out of school because education is seen as a threat to what their elders expect of them.


So in a sense I can understand why the Taliban banned the education of girls when they took over the Swat Valley. They, like my great uncle and many others in Pakistan, felt threatened by the effect of educating a girl. You see Malcolm X pretty much has summed it up for us. When you educate a woman, you don't just educate her, you liberate her. You allow her to travel on a path of self-discovery and you enable her to question her position in society. You empower her by giving her knowledge of what she can become. And this is dangerous. It is dangerous to the Taliban because it means that they will not be able to impose their patriarchal laws upon liberated women, it means that if they do they will be presented with a challenge and a force greater then them. And their rule will be effectively be diminished. It was a threat and a risk they couldn't take.
So for those asking what Malala Yousafzai has done to the Taliban, this is exactly what she has done. At the tender age of 11, Malala started writing in order to articulate her hopes and fears under a false name. When her cover was blown and she was threatened by the Taliban and its sympathizers, she did not cease her writing. In contrast she went public, so that by the age of 14 she was a name and a force to be reckoned with. You see by educating Malala, her parents had given her her greatest gift. They had enabled her to understand her potential and to recognise that her writing was a tool, it was the sword of opposition to the men who had taken away her privilege of studying. It was her opportunity to stick her middle finger up in defiance and to seek vengeance and boy, did she strike fear in their hearts! Malala Yousafzai was a threat because her defiance was an inspiration to others, others who lacked her bravery and her strength of character and determination. It was an act of defiance that could ignite a movement of opposition, an opposition the Taliban desperately wanted to quash, threaten and intimidate.
Their motive behind shooting Malala is a simple one: shoot the leader and you scare the followers. To them it is a message of force, but in reality it is an act of cowardice. It is an act which demonstrates how pig-headed the Taliban really are. It demonstrates their weakness and fragility. So weak that a young girl armed with her writing can be seen as a great threat, a threat so damaging to them that even after shooting her they state that if she does not die they will strike once more. It is this latter thought that makes them real fools. By believing that they have eliminated a threat by shooting Malala, or even, God forbid ,by killing her, they are seriously deluded. This act will inspire many more like Malala, frustrated with the oppression of women that they encounter daily, frustrated with their lack of human rights and frustrated by their governments inability to protect them.
They will rise out of their slumber with a sense of empowerment and purpose to set a precedent for future generations, and I pray to God that when they do, Malala is there to lead them once again.