Ilford 'Snapchat queen' guilty of manslaughter of her boyfriend 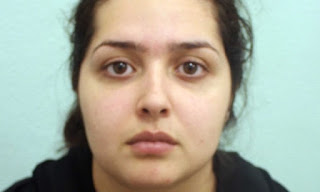 A “Snapchat queen” who posted a video of her boyfriend dying in a pool of blood has been found guilty of orchestrating his killing.
Fatima Khan, 20, plotted with a love rival to kill Afghan asylum seeker Khalid Safi, 18, whom she had been seeing for two years.
Safi was repeatedly stabbed in the chest by Raza Khan in North Acton, west London, on the evening of 1 December 2016, jurors were told.
Fatima Khan filmed him as he lay dying in the street and posted it on Snapchat with the caption: “This is what happens when you fuck with me.”
The self-confessed Snapchat addict denied murder and alternative counts of manslaughter and conspiracy to cause grievous bodily harm, saying she was ashamed of the video.
But a jury at the Old Bailey deliberated for 18 hours and eight minutes to find her guilty of manslaughter by a majority of 10-1 on Tuesday.
During the trial, jurors were shown the disturbing footage as well as CCTV images of the fatal confrontation between Safi and 19-year-old Raza Khan.
Prosecutor Kate Bex QC said the two men had fought over Fatima Khan a few years earlier, at which time Safi had been injured. And in the runup to the killing, Fatima Khan had been in daily contact with Raza Khan via Snapchat, jurors heard. She became upset when Safi bought her a watch and presented it to her at her home five days before his death, jurors heard.
Link
Posted by Zafar Khan at 09:00